History
71466 was built in 1947 at Andrew Barclay, Sons & Co. Ltd's Kilmarnock workshops in East Ayrshire, as part of a bulk batch of ministry of supply austerity locomotives for the war department. The class was developed from the 50550 class which it's own roots can be traced back to other classes before it, this design was chosen and modified to suit the needs of the War Department during WW2 with a total order of 377 being built for use in docks, freight yards and military establishments. These locomotives were built en-mass by Andrew Barclay, W.G.Bagnall, Hudswell Clark, Robert Stephenson and Hawthorns and the Vulcan Foundry in order to meet the demand.

After the end of the war with locomotive production still ongoing, rationalisation of the fleet including engines under construction was undertaken and the decision to dispose of parts of the fleet was undertaken including 71466. 71466 did not see active service with the WD but did receive the number 71466 prior to disposal, the next owner of this locomotive and 74 others of the class was the London North Eastern Railway (LNER).

Having had trials with one of the class in November 1945 and suffering from a lack of motive power due to toll of the war effort the LNER used them extensively for shunting yards and short trip freight workings with heavy loads as per the original intended use. Under LNER ownership, which was to last only a matter of months, the locomotive was re-numbered 8077, classified a J94 and painted in un-lined black. Initially shedded at Immingham for use in the docks, after being absorbed into British Railways ownership the engine was renumbered 68077 and fitted with an extended bunker in August 1949. After transferring to Hornsey in North London in January 1959 for more shunting and trip freight which was later undertaken at its future Boston and Colwick sheds, the locomotive’s time under BR ownership was coming to an end. The locomotive was withdrawn on Saturday 29th December 1962.

The locomotive was sold on to the National Coal Board for use in their South Yorkshire area coal pits. Put to use in the Rotherham Pits area mainly at Maltby colliery but occasionally others, whilst in NCB ownership it was renumbered No.14 and had its extended bunker removed to aid coaling. The locomotive was still in a black livery but the back of the cab, bunker, tank front and buffer beams gained wasp stripes.

In 1971 the Keighley & Worth Valley Railway (KWVR) purchased the locomotive and moved it Haworth shed in the September of that year. It was steamed at Haworth but it was evident additional works was needed to make it suitable to use on passenger workings, including fitting vacuum brakes and steam heat apparatus. Having received a cosmetic overhaul the locomotive was put in to store at Oxenhope museum and later moved to the back of the shed at Haworth.

Following a long period in store the Spa Valley Railway initially took the locomotive on loan in 2005, to restore and run, later purchasing 68077 from the KWVR. Being in need of a major overhaul the loco was stripped right down to almost the last nut an bolt. To date the locomotive has been taken back down to its frames with the cylinders bored, brake hangers machined, tyres turned, boiler works scoped and new axle box crowns purchased along with other necessary missing equipment.

For the time being this engine is currently in store with vital parts being preserved and once current projects are completed work can resume on this project.

Contrary to popular belief, 68077 is one of only two ex-BR J94 in preservation. The other 68078, is under restoration at a private site in Sellindge, Kent. Numerous industrial Austerities have been preserved and run in fictitious LNER and BR liveries but they are not officially a J94! We are therefore rightly proud to be in possession of this example. 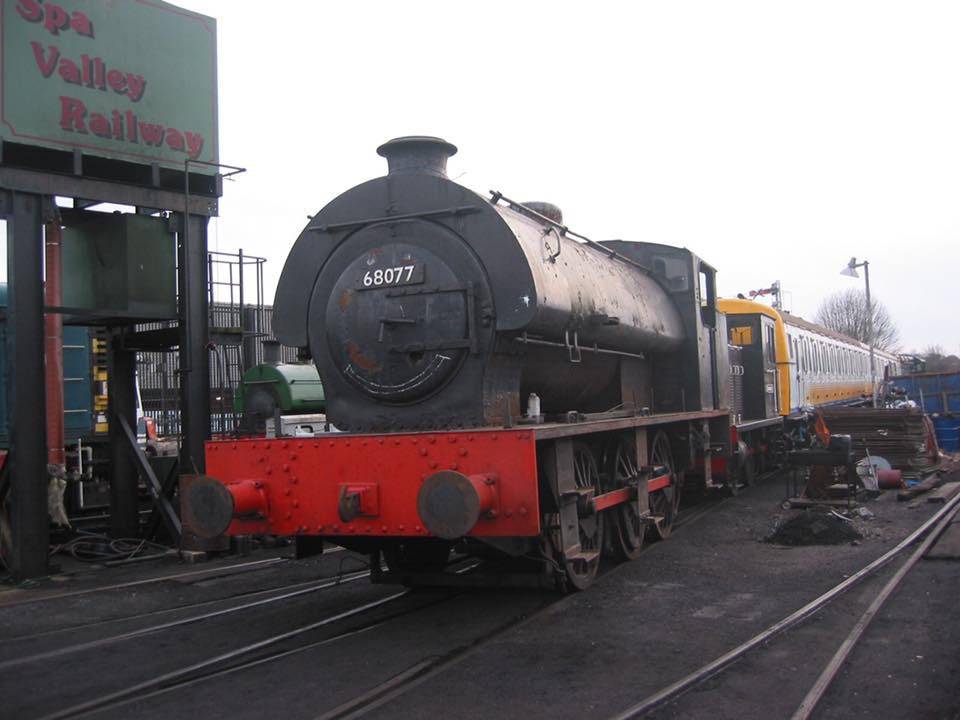