History
In the early months of 1922 W.G.Bagnall received an enquiry from nearby West Cannock Colliery Ltd. for a shunting locomotive. As part of the contract for supplying ‘Topham’ to the colliery a stipulation of the contract was that the colliery asked for a substantial amount of the payment to be made in coal. This was beneficial to the fact Bagnall's electricity generating plant at the Castle works was coal fired and there was a lower supply in coal production post World War One, caused by a post war trade depression. West Cannock colliery was one of the primary coal suppliers and the close proximity to the Bagnall works lead to a agreement being readily made.

West Cannock required a large six coupled shunting locomotive for their Hednesford colliery to join existing locomotive Hudswell Clark 'Stafford' which was proving inadequate. Bagnall's design was a six coupled saddle tank locomotive with walschaerts valve gear, being highly unusual for an industrial use locomotive. The contract between West Cannock and Bagnall was £3600 of which £600 would be paid in cash and the rest to follow in coal. Construction began on 26th April 1922 and allocated works number No.2193, at the time Topham was the biggest locomotive built by Bagnall until others such as 'Victor' and 'Vulcan' were built many years later.

No.2193 was fitted with backhead lifting injectors, brass boiler tubes, ross pop safety valves and a wakefield mechanical lubricator. Out shopped in black berry black and lined in cherry red and yellow lining, the loco was given the name ‘Topham’ after the owner of the West Cannock Colliery Ltd.

Bagnall were rightly proud of ‘Topham’, possibly because she was a one-off, and as a result she was used in a lot of the works’ publicity. She has subsequently featured on the front of a book written about W. G. Bagnall by Allen Civil and Allan C. Baker.

A smaller version of ‘Topham’ using the same design principles but with four coupled wheels, utilising steel boiler tubes and some changes in the operation of the valve gear was created for a Welsh steel works. Initially one of this class was delivered to British Iron and Steel company Ltd. and named ‘Kenfig’ which was later followed by three others but with a Stephenson link motion but largely to the same design.

Upon completion, ‘Topham’ was delivered by rail to Hednesford colliery arriving on 27th November 1922. She had the unusual status of being built facing the ‘wrong way’ in Bagnall’s workshop, to facilitate the movement by rail. Upon arrival, ‘Topham’ was put to work around the colliery and by 1932 she needed a new firebox, which shows how much work the locomotive undertook in its first ten years of operation. A new firebox was built by Bagnall and fitted by Hednesford Colliery employees, the firebox being part of Bagnall's work No.1883 24th May 1932. After carrying on its life of shunting at the colliery it had another new firebox fitted in 1945. Nationalisation of the collieries occured in 1st January 1947 with the Hednesford and Brindley Heath sites passing from ownership from West Cannock Colliery Ltd. to the National Coal Board West Midlands Division, No.2 (Cannock Chase) area. Upon this change of ownership ‘Topham’ was repainted into deep royal blue a livery adopted by the Cannock Chase area surface locomotives.

In 1955 the Hednesford Colliery site was closed and ‘Topham’ transferred to the West Cannock Colliery. In the late 1950's the locomotive went to the NCB's central area workshop for a full overhaul which included new axleboxes, motion brasses, tyres and extensive boiler work. After these works she worked continuously until 1965 when she was laid up in need of heavy motion work. With the more modern 'Austerity' locomotives now available the repairs to ‘Topham’ were deemed non-essential due to her being a non-standard loco. However during the loco's visit to the works in 1955, two sets of motion had been ordered and the second set was found and fitted upon funds becoming available, during a motive power crisis. The minimum was done to make ‘Topham’ operational again and painted in green deputising for the Austerity until the arrival of a Bagnall diesel shunter in 1969.

The locomotive was then moved to the Cannock Wood Colliery (formerly Rawnsley Wood) to help with the moving of a large stockpile of coal which had been sold to the central electrical generating board for the new Rugeley 'B' power station. The removal of this coal was a prime necessity with a diesel shunter and No.7 'Wimblebury' being utilised, as well as ‘Topham’, which was transferred via the BR Rugesley to Walsall line on the 12th February 1970, after a long time in store. In the end ‘Topham’ was little used with extra motive power sourced to move the stockpile. After transfer back to West Cannock the locomotive was laid aside mid-summer 1970 and never used again.

Purchased in 1972 by Allen Civil the loco moved to the Foxfield Railway becoming part of their early fleet. After repairs the locomotive was first steam tested in December 1973 and operated the intial single coach services and latter becamme the first to haul two on the line. Following sale in 1987 to the North Downs Steam Railway at Stone, Dartford, she ran until the end of her boiler ticket in 1990. The locomotive was dismantled at the Stone Lodge site for overhaul, which stalled when the extent of the works grew and funds were unavailable. The loco was subsequently transferred to the emerging Spa Valley Railway in 1996 upon the merging of NDSR and SVR. Since then ‘Topham’ has sat out of use whilst funds are raised for its overhaul. A Heritage Lottery Fund application was made in 2014 to get the loco overhauled for its centenary in 2022, bad sadly this was unsuccessful. Being owned by the volunteer Society behind the railway, many of the volunteers have a soft spot for the engine and it is an aspiration the loco will get overhauled in the future. 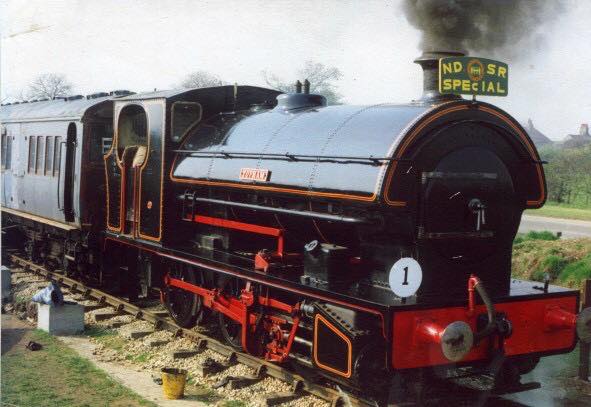