History
Built at Brighton Works in 1947, the locomotive was dedicated by Air Vice Marshall Sir Keith Park the locomotives namesake on the 15th September 1947 at Brighton station on the same day as classmate 21C167 'Tangmere'.

Allocated to Salisbury MPD, 34053 spent considerable time on loan to Stewarts Lane depot, where it was recorded hauling the heavy Continental boat expresses, including the Golden Arrow on many occasions. Following brief spells at Nine Elms and Exmouth Junction, it returned to Salisbury in 1951 working over the entire South Western network. In November 1958 the locomotive was rebuilt and its air smoothed casing was removed. It returned to Salisbury MPD.

The rebuilding solved most of the maintenance problems whilst retaining the excellent features of the original design. Repair costs were reduced by up to 60%, and coal consumption was reduced by up to 8.4%. A final transfer in 1960 saw it operating out of Bournemouth depot and at times it traversed the Somerset & Dorset at the head of the Pines Express.

34053 was withdrawn in October 1965 and towed to Barry scrap yard in South Wales the following March. Its arrival was delayed by several weeks, as there were some connecting rods in 34053's tender which struck a bridge near Chandler's Ford. The convoy of locos, which also included 76068, were left at the east siding of Romsey station for several weeks.

34053 arrived at Woodham's scrap yard in Barry during March 1966; it was to be 18 years before it moved on to the first step of its restoration. Charles Timms had bought the loco in 1979, but it was June or July 1984 before it left Barry en route for the former Hull Dairycoates depot, arriving in November. It was the 153rd loco out of a total of 213 rescued from Barry. Also purchased was the tender of 35006, though this was sold on to the Port Line project (which subsequently became Southern Locomotives Ltd) and this went to Swindon, not Hull.

The work at Hull was under the supervision of Tom Tighe. The bogie and pony truck were removed and sent to Swindon in February 1988 for work to be carried out using the former Swindon Works wheel lathe, and the boiler lifted from the frames for restoration. Several new parts were ordered and produced, mainly fabricated parts, such as running boards, smoke deflectors etc. Little work was done to the boiler or chassis at that time. Mr Timms died in 1992 and the loco was sold, together with available parts, to Dr John F Kennedy and moved to the Railway Age at Crewe during 1992 with a view to early restoration.

Things didn't work out as planned, and in 1995 the loco moved to Thingley Junction (west of Chippenham, where the Melksham line leaves the line to Bath). Little work was done on 34053 during this period, and ultimately it was sold to Jeremy Hosking for use as spare parts for Braunton and moved to Bishops Lydeard on the West Somerset Railway in January 1997.

It was moved by rail from Bishops Lydeard to Williton on 22nd February 1997. During the summer of 1997, the boiler tubes were removed to assess the boiler's suitability as a donor for Braunton, however it emerged that Braunton's own boiler was the better of the two.

As Southern Locomotives was involved in contract work for Braunton they were given first refusal to purchase the locomotive when it was deemed surplus to requirements. A generous purchase price which included some parts which Braunton had not used, saw 34053 leave Williton on 22nd December 2000 to arrive at Sellindge on 28th December 2000. The transport company's invoice read, "the remains of Sir Keith Park".

Eventually she was purchased by Southern Locomotives Ltd and was then moved to their workshop at Sellindge where she arrived on 28 December 2000. After being moved once again to the workshops of South Coast Engineering in Portland after space issues arose in Sellindge, she was taken apart and so began the long job of restoring her to full working order. In late 2008, once fellow light pacific 34070 Manston had left SLL's workshop at Herston, 34053 was transferred to Herston Works where her restoration was to continue.

Because her original tender had been lost during her time at Barry Island a brand new tender had to be built for 34053 as well as new tender wheelsets, tender frames, tank and all the other required pieces.

34053's restoration was completed in May 2012; however, because her originally intended home at the Swanage Railway had no use for her as they already had fellow SLL based engines 34028 Eddystone and 34070 Manston both operational and running on the line, it was decided to base the loco for the foreseeable future at the Severn Valley Railway. Following weeks of testing and running in on the line she entered service in August 2012. After having been withdrawn over 47 years earlier by British Railways and having been restored at the cost of £773,000 the locomotive looked magnificent awaiting its recommissioning ceremony, adding to the list of the 6 other Barry wrecks they had restored.

On Saturday 31st August 2013 a naming ceremony was held at Bridgnorth to re-dedicate the locomotive in honour of Sir Keith Park; the locomotive was re commissioned by the New Zealand High Commissioner Sir Lockwood Smith. 34053 then went on to give 5 years reliable service at the Severn Valley before moving South to the Swanage Railway in early 2018.

The locomotive comes to us in full working order under a new agreement between the Spa Valley Railway and Southern Locomotives Ltd which will see the Bulleid Pacific based at 75F permanently. The locomotive will enter service in 2020 and see regular use during 2021.

‘Sir Keith’ will be the first known Bulleid to be at Tunbridge Wells West since fellow class mate 34066 'Spitfire' hauled the RCTS/LCGB "Sussex Downsman" railtour (Heathfield - Polegate - Pevensey) on the 22nd March 1964. It will also be the largest steam locomotive to date to run over the line in preservation and highly appropriate to the area. It is planned that fellow SLL fleet member Austerity 'Norman' will meet Sir Keith Park in 2021 upon arrival from contract overhaul. 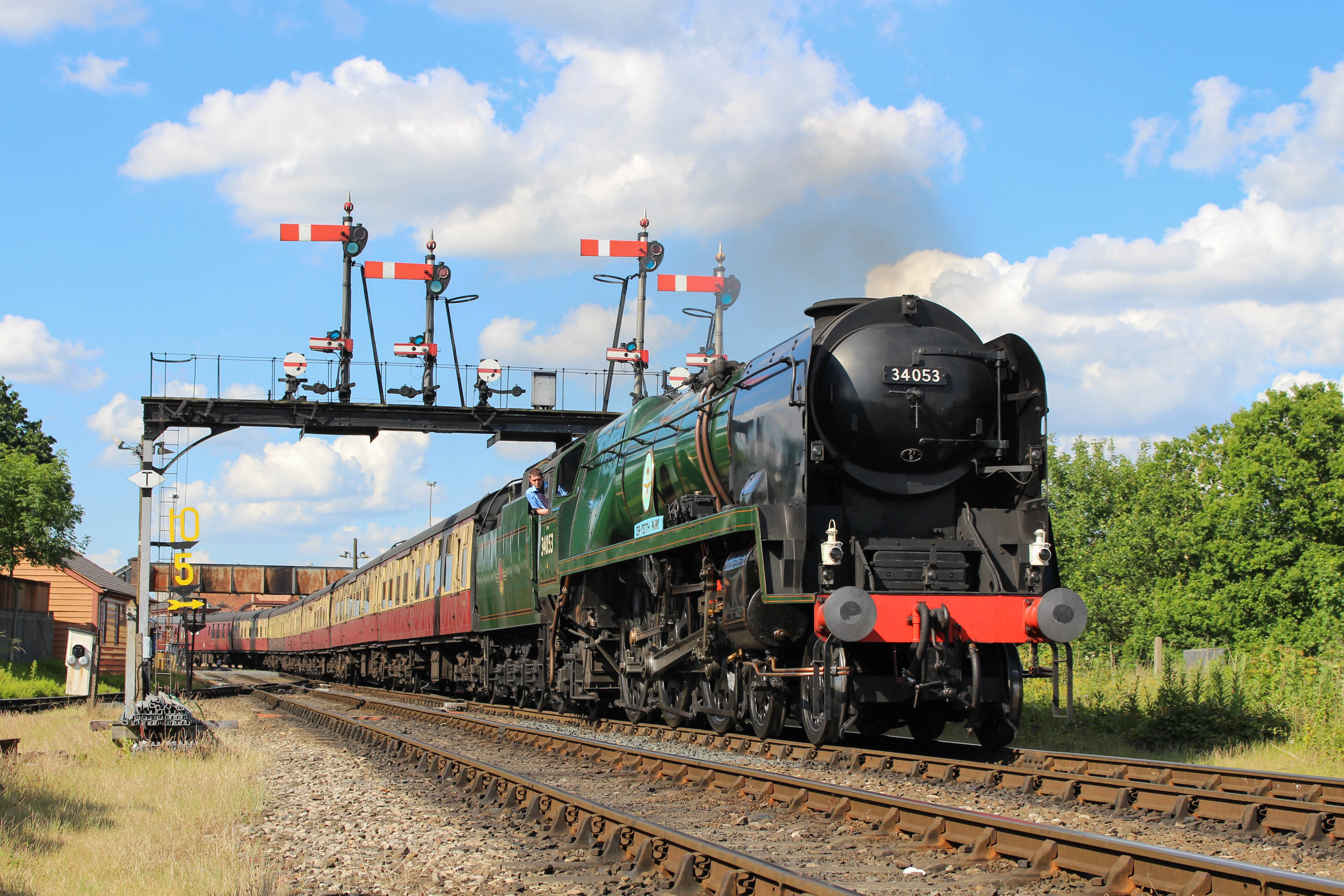